This November, Blame it on the BED!

Beware the haunted bed this November! A frightening futon rears its springs this November in Black Fawn Films’ The Dwelling, on Digital and DVD November 26 from Uncork’d Entertainment. Four people find themselves stuck on a haunted antique bed where leaving means suffering a gruesome death. Plagued with frightening hallucinations, they must figure out the bed's secrets before they are ultimately picked off one by one. Directed by Jeff Maher, and written by Maher and C

Star of Emmy-award nominated OZARK in SEEDS, in theaters this September Dark Star Pictures and Uncork’d Entertainment present SEEDS, in theaters September 13 and on VOD/DVD September 24. Starring Trevor Long, star of Netflix drama Ozark, which was this week nominated for 9 Emmy Awards, director Owen Long’s SEEDS is a gothic horror about a man haunted by his dark past while pursuing some self-care on the New England coast. After a night of debauchery spirals out of control,

A LEGEND RISES THIS AUGUST!

A LEGEND RISES THIS AUGUST! BURBANK, CA : A legendary villain is resurrected this August! From filmmakers Khu and Justin Price, and starring Carter (Live Evil), David E. Cazares (The 13th Friday), Brittany Goodwin (“Murder by Numbers”) and Deanna Grace Congo (Alien : Reign of Man), witness The Mummy Rebirth this summer from Uncork’d Entertainment! Two treasure hunters uncover a sealed tomb and awaken a mummy that has waited years to come back and wipe humanity from the fa

THE NIGHT SITTER - OUT THIS AUGUST!

FROM THE CREATOR OF FINAL DESTINATION THE NIGHT SITTER - OUT THIS AUGUST! BURBANK, CA : John Rocco and Abiel Bruhn’s highly-anticipated horror feature The Night Sitter is set to spook summer, with a digital and DVD bow set for August via Uncork’d Entertainment. Starring The Walking Dead’s Elyse DuFour, The Night Sitter fixes on a scheming con artist that poses as innocent babysitter to steal from a wealthy occult enthusiast. Just as the thief arrives to clean out the house,

This summer, trespassers will be prosecuted with terror. From writer-director Miles Doleac (Demons), comes a spine-chilling new motion picture experience in the tradition of The Green Inferno and Deliverance, Hallowed Ground. A married couple, trying to rebuild their relationship after an affair, travels to a secluded cabin and stumbles into a blood feud between the Native American owners of the property and the neighboring clan, who obsessively guard their land and punish

There’s something frighteningly fishy going on in Lisa Brühlmann’s shocking debut feature Blue My Mind, in theaters and On Demand this November through Uncork’d Entertainment. An elegiac allegory accompanied by hauntingly visceral body horror, Blue My Mind is part Suspiria and part The Metamorphosis but largely incontestably unique. Luna Wedler and Zoë Pastelle Holthuizen headline a celebrated fantasy-drama about a young woman who faces an overwhelming transformation which

THE BASEMENT HITS THEATERS AND ON DEMAND THIS FRIDAY

Two brand new clips for director Brian M.Conley’s “horrifyingly intimate” (PopGeeks) The Basement, available on Demand and opening in theaters in Los Angeles, Houston, San Francisco, Chicago, Atlanta, Cleveland, Dallas, Minneapolis and Phoenix from Friday, have been released. A film the critics say is full of “shock and surprise” (Flickering Myth) and is “cinematic and compelling” (OC Movie Reviews), The Basement stars Mischa Barton (“The OC”, The Sixth Sense) in a new Uncork 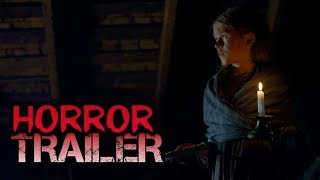 Toronto – Uncork’d Entertainment has acquired all North American rights to St. Agatha, the latest film from celebrated filmmaker Darren Lynn Bousman (Saw II, III, IV,). The female-driven psychological horror film premiered at the Overlook Film Festival in April. Written by Andy Demetrio, Shaun Fletcher, Sara Sometti Michaels, and Clint Sears, St. Agatha is set in 1950’s Georgia, and fixes on a pregnant con woman who is on the run and seeks refuge in a convent. What first

PRAY FOR MORNING this October

Not every working actor is  a superstar, they're SOMEWHERE IN THE MIDDLE

HOT OFF THE WICKED + THE DIVINE FINALE, JAMIE McKELVIE SET TO LAUNCH THE KILLING HORIZON FROM IMAGE

HOLIDAY HELL COMING TO THEATERS, TUBI AND MORE THIS OCTOBER!

This November, Blame it on the BED!

PRAY FOR MORNING this October

Not every working actor is  a superstar, they're SOMEWHERE IN THE MIDDLE

HOT OFF THE WICKED + THE DIVINE FINALE, JAMIE McKELVIE SET TO LAUNCH THE KILLING HORIZON FROM IMAGE